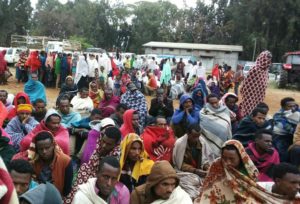 AHRE strongly condemns the continued displacement of Amhara people from their home in Kemashe Zone, Benishangul Gumuz region. According to our local sources, more than 530 ethnic Amhara households (each household has from 2-8 members) have been forcefully displaced from their land and forced to leave their home. We have received credible reports that local authorities ordered armed militias and other residents to attack Amhara people who settled in the area for many decades. The recent attack started in October 2017 and continued till end of April 2018. During the attack 13 ethnic Amhara people were killed and at least 50 others were injured. Thousands have fled to the neighboring Oromia region and to the capital of Amhara Region, Bahir Dar for shelter. AHRE has the names of the victims and official documents which show their legal status as residents in the region.

Ethiopia has failed to stop such an ethnic-targeted clashes, displacement and assaults that have been repeatedly observed in different parts of the country, including in Benshangul Gumuz. Forcible eviction of population by expulsion or other coercive acts from the area in which individuals reside lawfully is unlawful and prohibited under international law and Ethiopian constitution. Ethiopia’s ethnic based policy has largely contributed to the displacements and attacks which has cost the lives of thousands of Ethiopians for over two decades.

In the last 26 years thousands of ethnic Amhara People have been displaced from Oromia Region, from different part of Southern Nation, Nationalities and Peoples Region (SNNPR) and mainly from Benishangul Gumuz Region. Reports published as early as 2000, show the reality of ethnic displacement in different parts of the country. In its 34th Regular Report, published in September 2000, the former EHRCO, currently named the Human Rights Council, said that “The harmfulness of this ethnic-based policy that the government is pursuing has been shown by the ethnic conflicts that occurred in Borena and Arsi zones, Harar, Benishangul, Minjar and Shenkora wereda, Semen Omo, Gedeo and Guji, and other places during the past nine years. These ethnic conflicts have shown clearly that additional and more frightening problems than the many endemic social and economic ones await the Ethiopian people.”[1]

Following the recent eviction of Amhara People from Benishangul Gumuz region, the response of both the federal and regional governments were unsatisfactory which demonstrate that authorities have still not given needed attention and do not seem to find solution to these alarming problems. After escaping the orchestrated attacks, the victims were not given basic humanitarian treatment from Amhara regional government; they did not receive food and other emergency supplies. They have been forced to spend the last few weeks on the streets of Bahir Dar, and at least 160 families have sheltered at Bahir Dar St. Georgis church.

AHRE also received reports that some of the displaced have been forcefully transported to different areas in Amhara region, where they originally moved from decades ago. According to VOA Amharic[2], 360 families were returned to their village where they originally came from and 26 others were returned to Benishangul Gumuz after the two regional governments have reached an agreement.

AHRE has previously reported the displacement of the now over 1 million mainly ethnic Oromos and also ethnic Somalis from their villages due to clashes that have erupted in Oromia and Ethio- Somali border areas.[3]

AHRE urges the Ethiopian government to: