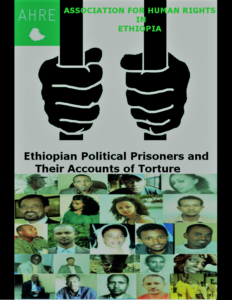 The Association for Human Rights in Ethiopia (AHRE) is pleased to announce the launch of its 2nd report, “Ethiopian political prisoners and their accounts of torture”. This report aims to provide an overview of the prison situation in Ethiopia, with a special focus on the different forms of abuses prisoners are subjected with in different prisons in Ethiopia.

In the past three years, following the protests in different parts of the country, mainly in Amhara and Oromia regions, the number of detainees has dramatically soared, that in turn augmented the reports of abuse in Ethiopia’s prisons. Furthermore, detainees accused of burning Qilinto prison have also reported to suffer torture during interrogations, mainly to extract forced confessions that implicate the detainees to the crime. Many have testified in court to enduring varying degree of abuses at the hands of security officers. The abuses include beatings; verbal, physical and psychological harassment; solitary confinement; denying medical access etc.

This report documents and brings to attention some of the abuses and ill-treatments committed against prisoners detaineed in recent years, mainly following Amhara and Oromo protests, and those charged for allegedly setting Qilinto prison ablaze. In addition, the report also takes a closer look at investigations conducted by Ethiopian Human Rights Commission, under the court’s order, and discusses the findings and its implications.